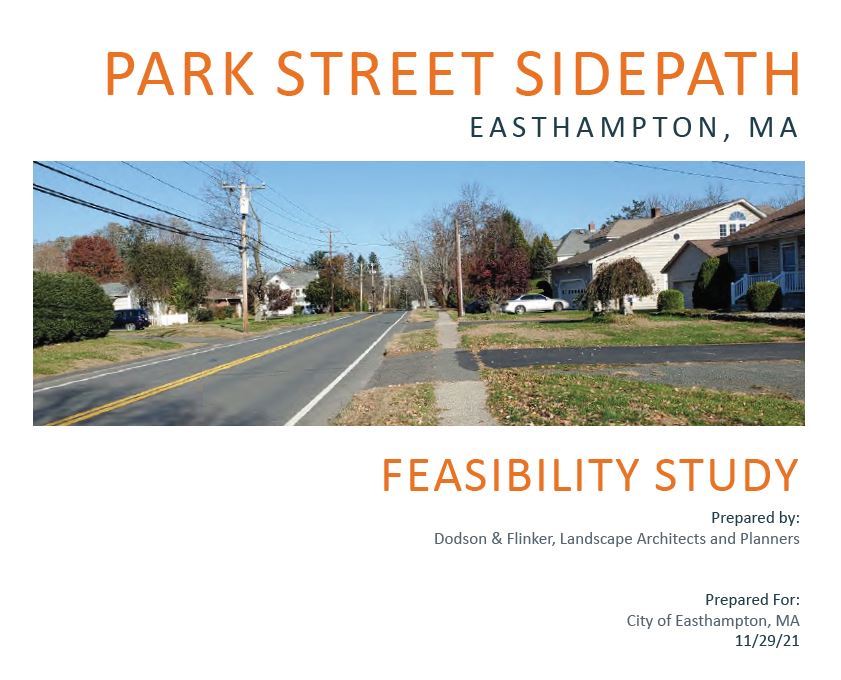 City of Easthampton awarded between $1.5-$1.875 million infrastructure grant from Safe Routes to School for Park Street.

The City of Easthampton was recently awarded an infrastructure grant from the MassDOT Safe Routes to School program.  The project will enhance bicycle and pedestrian safety improvements along Park Street from the Manhan Rail Trail to the new Mountain View PreK-8 school.

“This grant is a partnership between the School Department, Planning Department, DPW and the Mayor’s Office and will enhance the route along Park Street to be safer for kids, families, and residents to get to the new Mountain View School.  It represents continued investment into Easthampton Public Schools infrastructure and will open up opportunities for students from across town to safely get to the new school by walking or biking”, said Dr. Allison LeClair Superintendent of Easthampton Public Schools.

The project includes the construction of a 400-foot-long accessible multiuse path connection from the existing Manhan Rail Trail up to Park Street.  It will also include a 3,600-foot-long, eight-foot-wide sidepath along Park Street to the entrance of the new Mountain View School entrance, new ADA ramps and crosswalks at four street crossings (Ward Avenue, Garfield Avenue, Bryan Avenue, and Taft Avenue), new ADA ramps at 19 driveways and some adjustments to Park Street including new pavement markings and traffic calming.

“The decision to focus on Park Street was based on it being the main route to the new school and upgrading it first will serve the largest number of students and neighborhoods north of the new school.  The connection to Manhan Rail Trail is critical to allow students living in the Pleasant Green neighborhood, for example, to get to the school without a car and along safe route.  We are grateful that MassDOT has chosen our project out of a competitive list.   Unlike the Union Street project, MassDOT will pay for all design work and nearly all the project costs; the City will need to pay for legal costs, utility relocation, and acquisition of any land needed”, said Mayor Nicole LaChapelle.

“Connecting the Manhan Rail Trail to neighborhoods and schools has been a long term goal and has been identified in many of the City’s long term planning documents.  This is part of a concerted effort to identify and prioritize new upgraded access to the new school that began in 2018/2019.  This project along with other routes including enhanced trail access from the new school and Nonotuck and the High School will take years to complete but are being planned now”, said City Planner Jeff Bagg

The project will not start construction until 2025 at the earliest and must follow the robust MassDOT process which will include: a stakeholder meeting in the spring/early summer of 2022, 25-75% design public hearings in 2023/2024, final design and project bidding in 2025, and project completion and ribbon cutting in 2026.  During this time the project design may change from what was identified in the Feasibility Study.

View the following for more information about this exciting project! 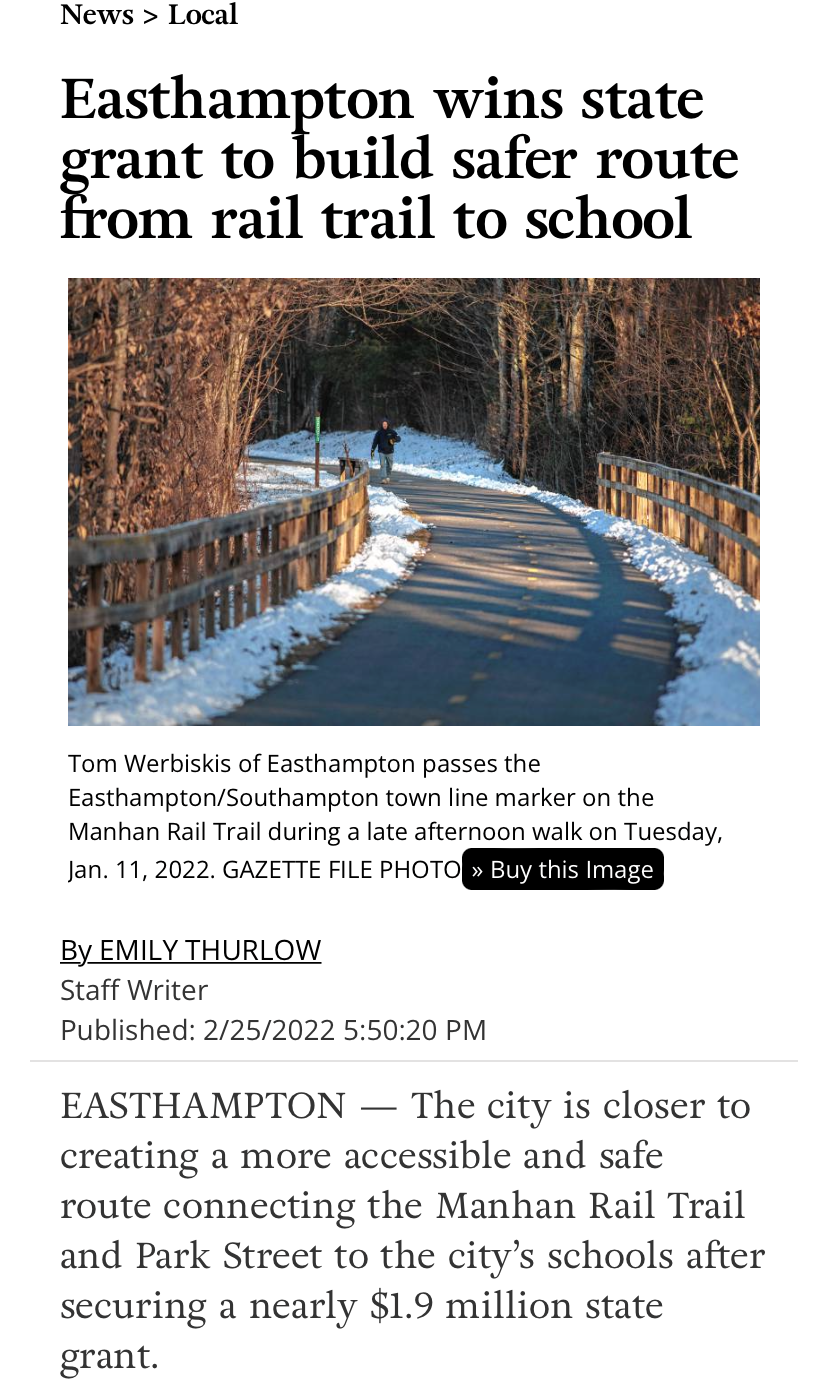 Click here or the image to view the Gazette article from February 25, 2022 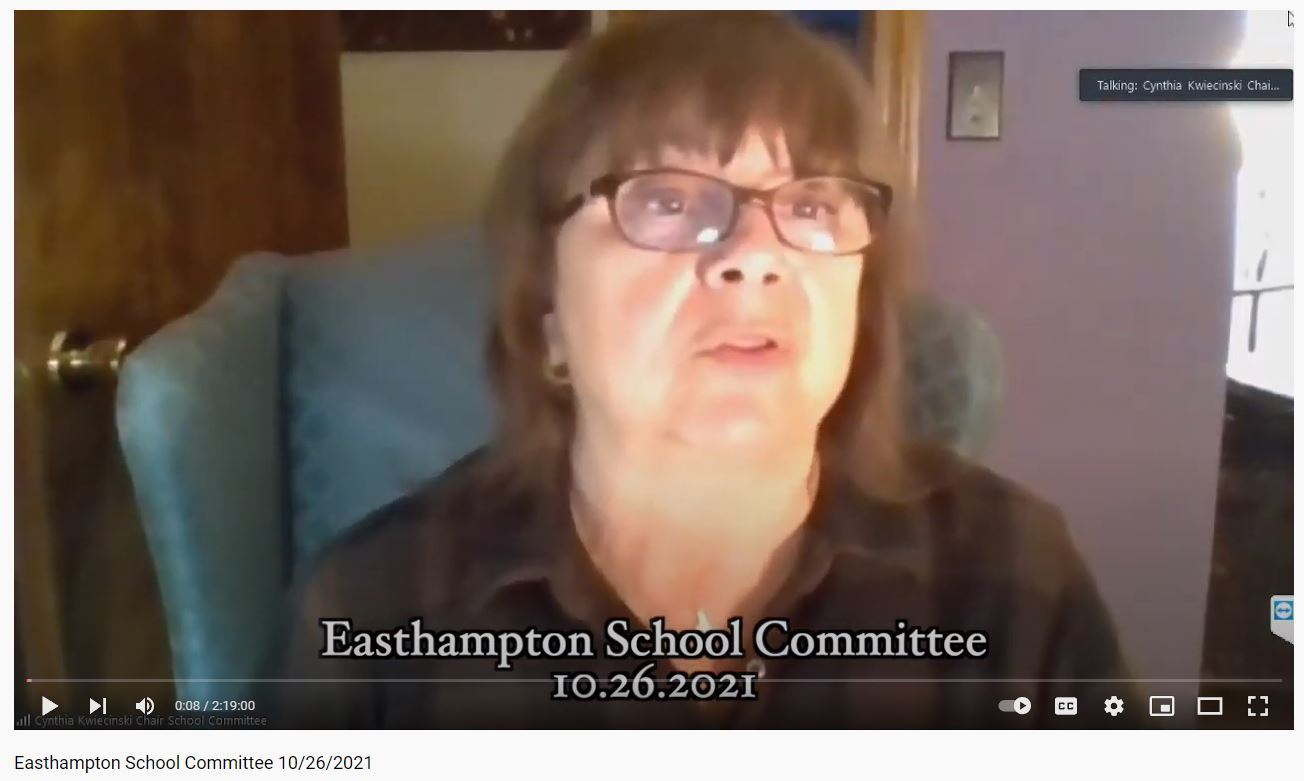 Click the image to watch the Safe Routes to School Walk Audit presentation and introduction of the infrastructure grant project to the School Committee on October 26, 2021 (starts at 14:15) 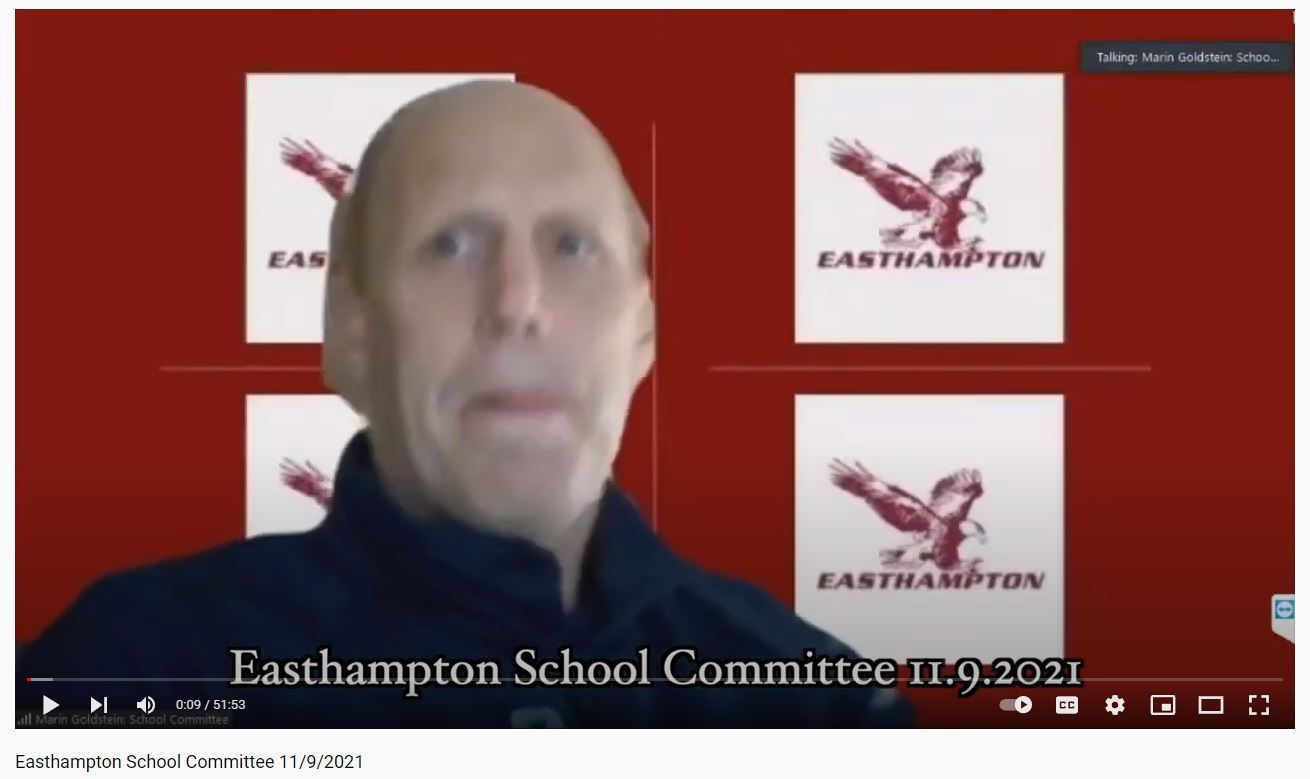 Click the image to watch the second presentation of the infrastructure grant project to School Committee on November 9, 2021 (starts at 5:25) 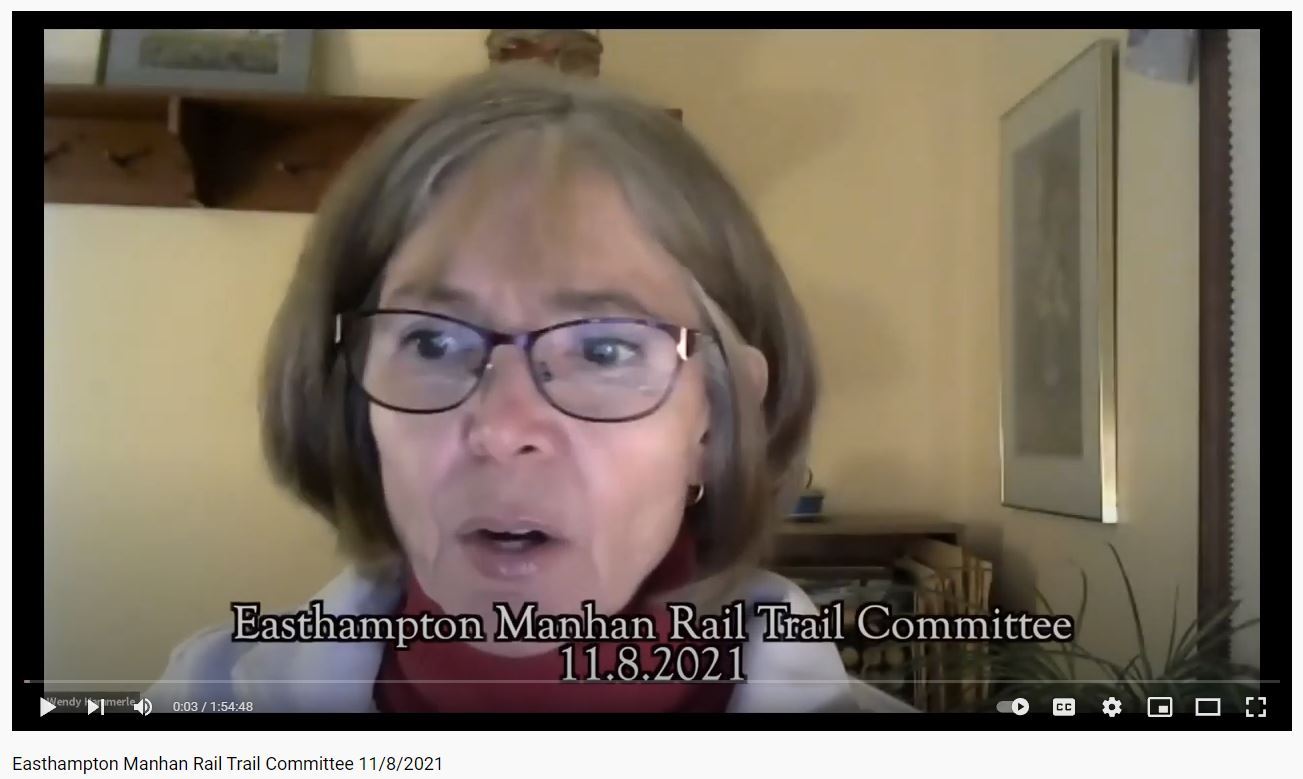 Click the image to watch the presentation of the infrastructure project to the Manhan Rail Trail Committee on November 8, 2021 (starts at 7:25) 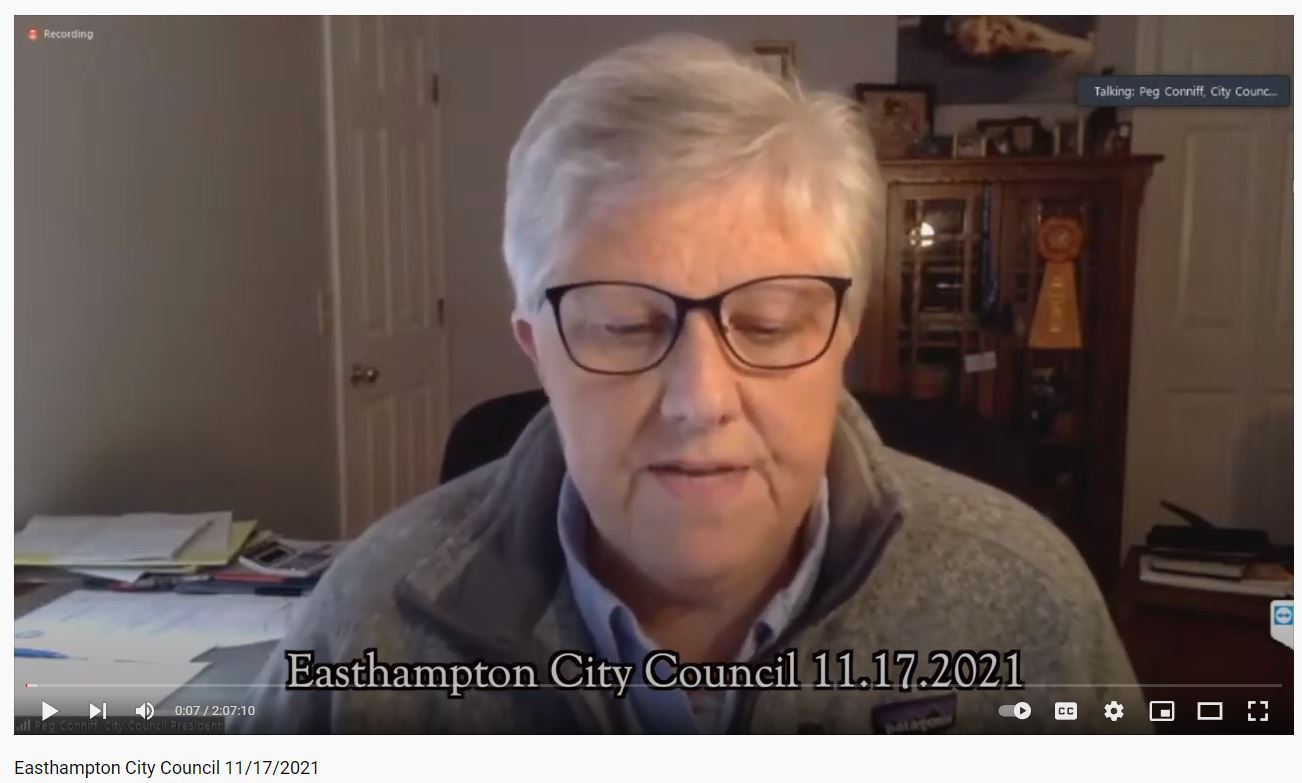 Click on the image to watch the presentation of the infrastructure project to the City Council on November 17, 2021 (starts at 1:20:45) 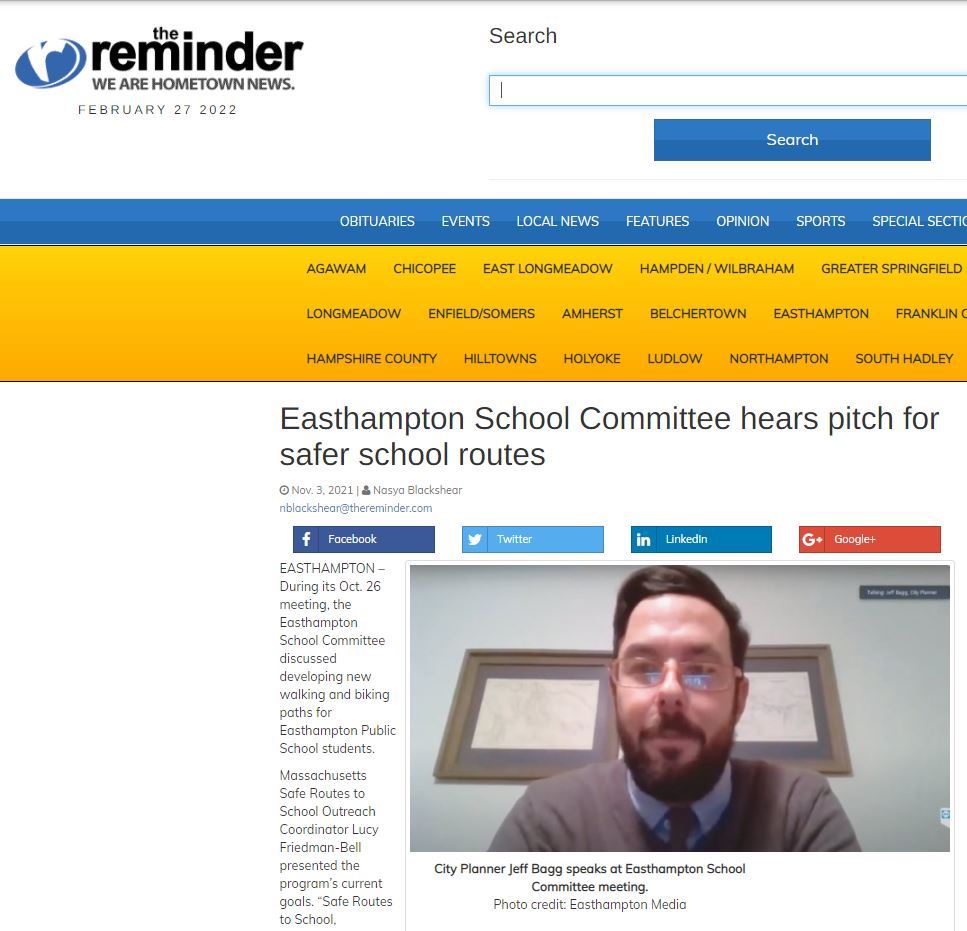 Click the image to read the article about the infrastructure grant in the November 3, 2021 edition of the Reminder. 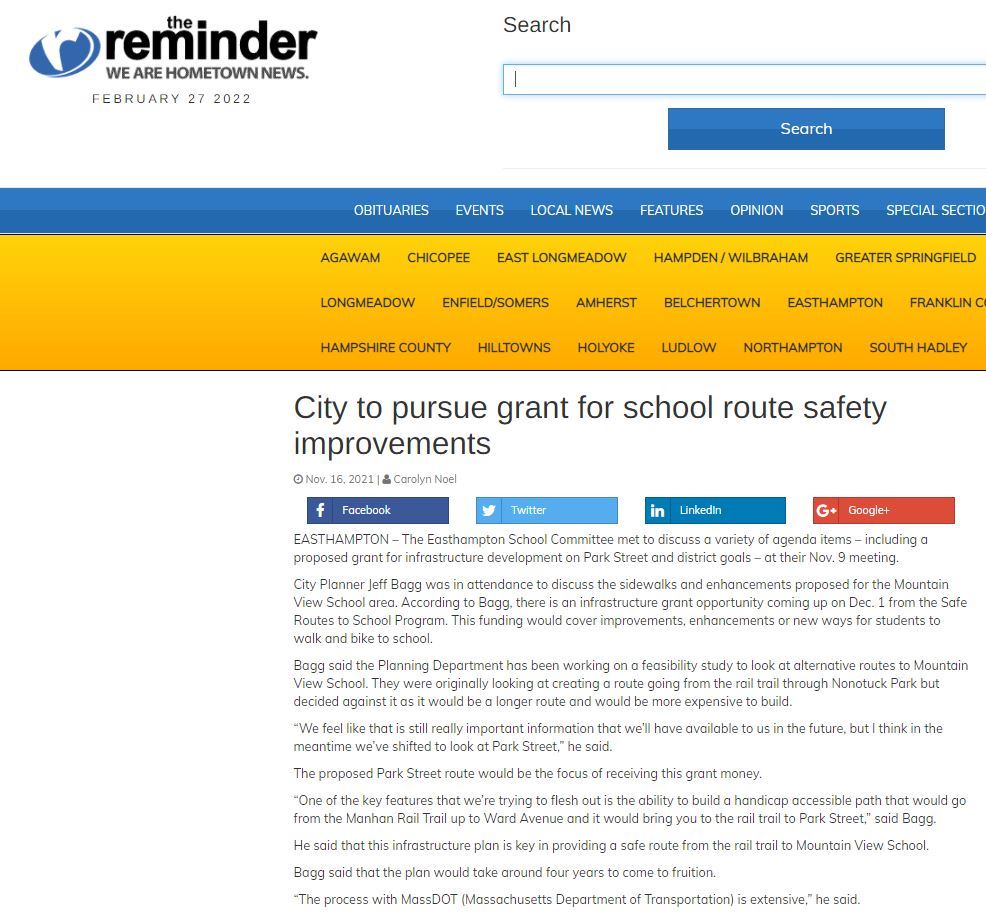 Click on the image to read the article about the infrastructure grant in the November 16, 2021 edition of the Reminder. 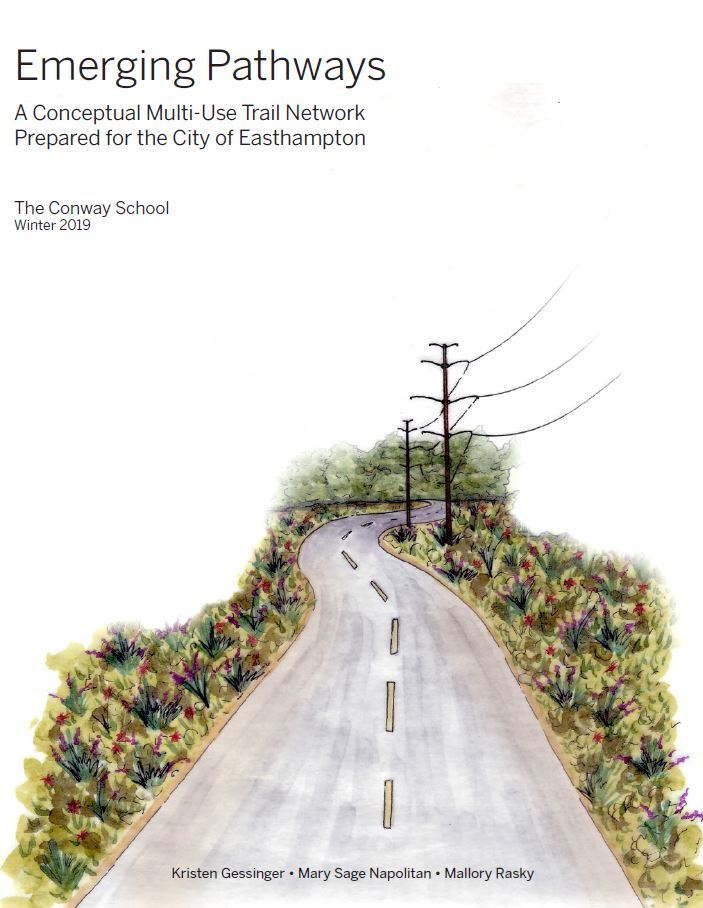 Click here or on the image to view the Conway School's 2019 study which takes a broad look at multiple routes to connect neighborhoods to the new school as well as other important connections to support more pedestrian and bike routes in the City. 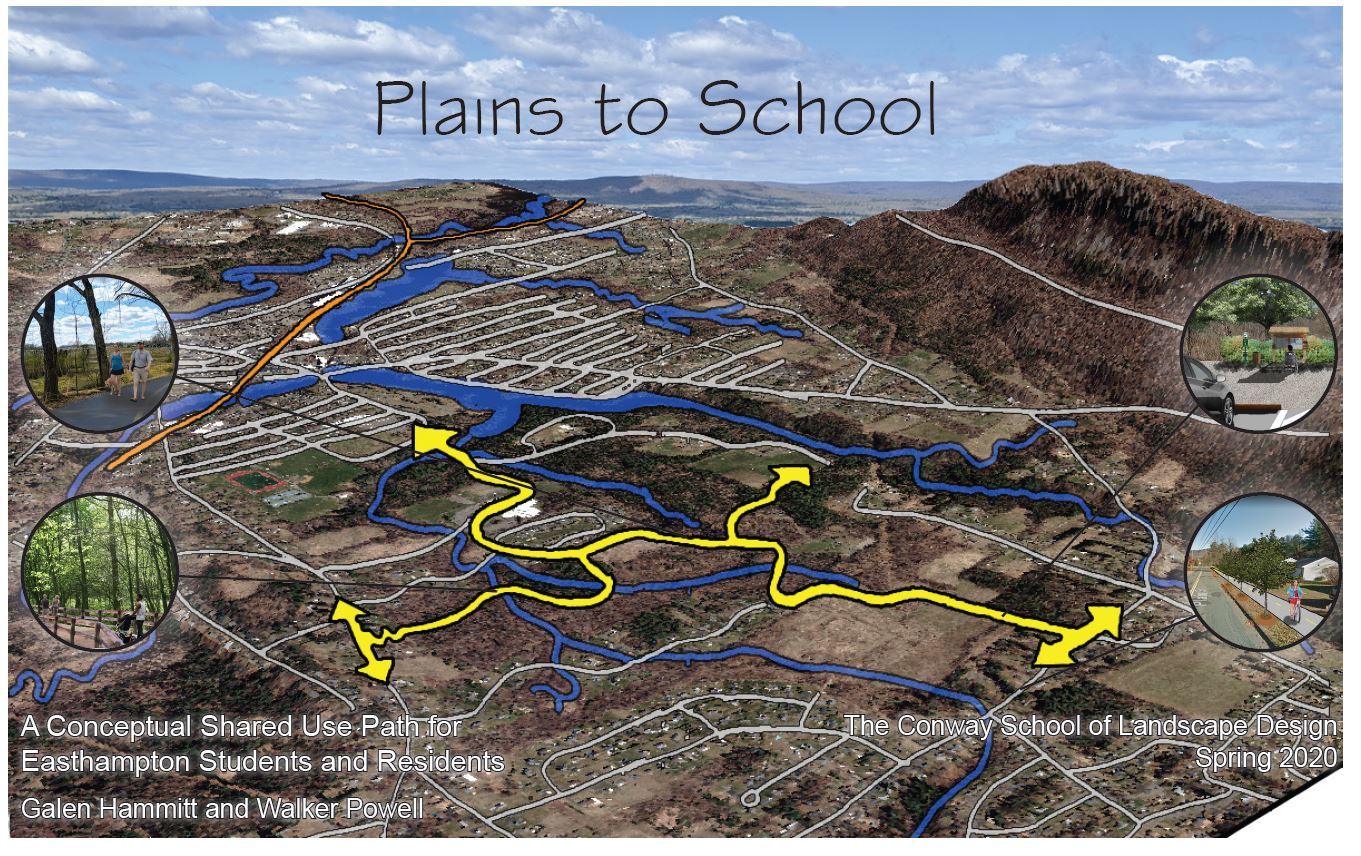 Click here or on the image to view the 2020 Conway School study of a potential route from the Plains to the new school.